Hot Dogs & Gin was established in March 2016 as a full band version of father & son duo Doug & Eamonn Hubert who’ve been performing blues, rock, folk, and Irish music around the Southern Tier and occasionally Northeastern PA since about May 2014.

Eamonn (lead guitar, vocals) is an award-winning 11-year-old guitarist who has been performing for about 5 years. He also plays violin/fiddle, piano, ukulele, mandolin, bass guitar, tenor saxophone, and is decent on the banjo and drums as well! He’s a pretty good actor and singer, too– he spent 20 weeks touring the US in the cast of a Broadway musical at age 10.

Eamonn has Autism Spectrum Disorder, ADHD, and stutters but he also has perfect pitch which occurs in roughly 1 of every 10,000 people. Settle in for an informative lecture should you happen to ask him about guitars, guitar pedals, dead guitarists, storm chasing…

We know–you’re wondering why “Hot Dogs & Gin”, right? A family friend of Doug’s parents used to always joke with him and his brothers when they complained about whatever was for dinner: “Want some hot dogs and gin?” We think the name is an accurate reference to the three older guys and one kid who make up the band. Plus, it’s just plain fun to say “Hot Dogs & Gin!” 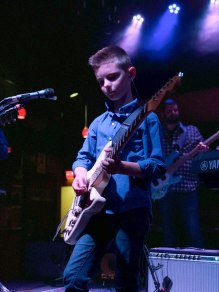 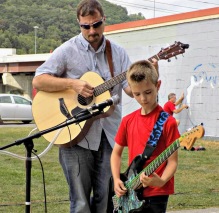 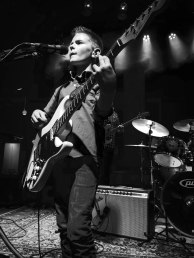